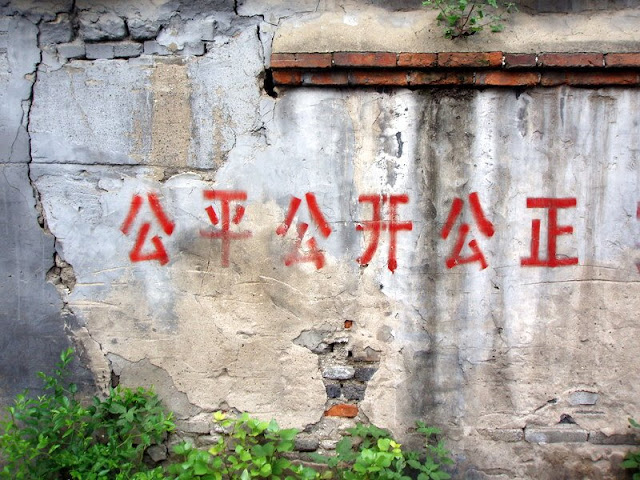 
When the east gate is open, it’s about as predictable as the DMV. It was closed this morning at 10:30. Frustrated, I asked the guardian of the west gate what the east gate hours were.

He lisped back to me, “It’s open at seven. It’s closed from twelve to one for lunch, and then closes for the night at nine.”

I waited five seconds. He seemed satisfied with his answer, so I didn’t pursue it any further.

A few days ago, I posted some pictures of Beijing hutongs: small-alleyed villages, really, that sit in the center of the city. They sprawl all over the downtown—behind, in front of, and around the ancient sites and glassy skyscrapers that dominate the city’s skyline. There’s a ton of life in the hutongs, and sentimental folk, perhaps disproportionately of the white persuasion, get pretty frustrated with the idea that many are being torn down—razed as an offering to modernity. I haven’t quite formed an opinion on this yet (mostly because mine doesn’t matter), but I think a nuanced conversation I had with my friend Ian might be of service. Ian was in Hong Kong at the time...we were on gchat...which I was accessing on my laptop...which was using wireless internet service… from a very trendy coffee shop… in what used to be a hutong.


“Me: i think i want to live in a hutong

Ian: i knew a guy who did that

Ian: kind of a jerk*

me: i’d hope to do it without the jerkiness*
Ian: kind of hard

me: really? why? i’m liking living with old retirees right now. would it have to be different?

Ian: i dunno
yes its “culturally” interesting
but i bet a lot of those people would want a nicer apartment too
it’s kidn of like you’re slumming


The (de)construction’s happening regardless of if I can run across China to raise money to save the hutongs or not, so I’m going to connect this digression to the wall conversation.

Anytime there’s a construction site in China, there will be walls around it. Anytime there are walls around it, there will be some sort of propaganda on those walls. I found the propaganda on the hutongs interesting because it makes more concessions than most wall writing, underlying the controversial nature of the destruction/renovation of the hutongs. A few of the more interesting ones were as follows: “BRING ABOUT A SUN-SHINY TRANSITION;” “IMPROVE/PROTECT THE ALREADY BEAUTIFUL ENVIRONMENT;” and my personal favorite (posted above), “FAIR, OPEN, AND IMPARTIAL.”

That last one really struck me, for the wall dost protest too much. Rarely have I seen a wall feeling the need to laud the procedural legitimacy of its own existence. Fairness is usually implied. There’s too much stuff to tear down and build back up in this country for prolonged, open debate on every ache and pain some local has about a demolition project. Normally the stenciled writing on the construction walls says something like “GREEN CITIES AND BLUE SKIES FOR EVERYONE,” “HELP OLD/DISABLED PEOPLE,” or “LET’S BUILD A CULTURED CITY.” Makes one wonder if in some bureau they’ve got packs of controversial stencils, sort-of-controversial stencils, and completely-uncontroversial stencils.

Either way, my wholly unsubstantiated judgment is that the Beijing government is quite aware of the dilemma of tearing down one of the sweetest parts of the city simply because it’s old, unhygienic and lacking basic infrastructure.

“Something there is that doesn’t love a wall, That wants it down.”

There are a lot of walls in China, and a lot of things written on them and hidden behind them as well. But something troubles me about extending the metaphor.

In my experience, Chinese insularity doesn’t push much past etiquette, an etiquette that is easily—often willingly—discarded. On a deeper level, many Chinese are just waiting to whisper great personal secrets if given a chance. Of course, this may or may not be alcohol induced. This is true on the international level as well. There is a great longing for communication with the West, for acceptance. That’s obvious when you talk to many Chinese who complain that the Opening Ceremony itself was made for the West, not for Chinese people. I've had government officials and taxi drivers tell me the same thing. They're sick of the old stuff- they want to talk about New China. It's all “too much history that we know already.’’ (Some of that might be self-deprecation. They know it was an unreal ceremony, and therefore saying anything complimentary about it at all would certainly be bragging.)

Yet it’s still a longing for acceptance that has to overcome quite a lot: a language that isn’t easy to translate into or out of, centuries of mistrust and Western domination, a huge population --and the concomitant self-confidence and unselfconciousness that come with being part of a “majority culture“-- that intimidates non-Chinese and provides easy cover for Chinese spooked by unsuccessful attempts to communicate with foreigners. But that longing is still there. It’s as if, behind each wall in China, there’s a person sitting there with a sledgehammer just waiting for the go-ahead to destroy it; one just has to give them that chance – and guarantee that they’ll have someone to welcome them on the other side.

I think, at bottom, that’s why I came to China, it’s why I learned Chinese, and why I’m so addicted to this place. Amazing things can happen when you can help someone get past superficial stuff like everything that makes you you and them them.

Anyway, I hope they destroy the wall that separates my east and west gates first.
Posted by Seth Gurgel at 7:47 AM