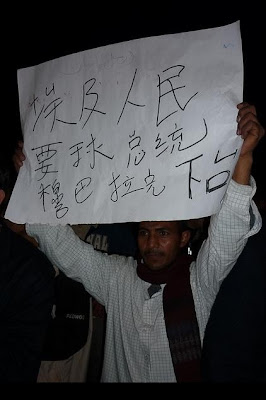 
In one of my last posts (quite a while ago, I know), I asked:
“What is still unresolved [in China]? [I]t's the question of whether or not the concept of “scientific development” extends to political reform, rule of law, and universal values.  Besides the overabundance of Greek-inspired architecture in China, another thing one notices if one spends a lot of time here is the (surprising?) belief, held by more people than you would think, that democratic progress is inexorable.  In many ways it makes sense.  The story of post-Renaissance Europe is a messy, violent, bloody period, but progress in science, culture, art and economics were intricately tied to political reform.  Enlightenment-era romantics certainly believed this was the case.  More than that, China's neighbors -- South Korea, Taiwan, and Japan -- are all excellent examples of how well democracy took in Confucianist countries when it was more or less imposed upon them (by foreign and domestic agents).  Perhaps their confidence that democracy is just another offshoot of their economic and social progress of the past thirty years is not too far-fetched.”

Most of the posts I've read these past few weeks about “what Egypt means for China” have either used "Egypt" as a symbol with which to bludgeon the Chinese government or have run China through an “Egypt analysis,” evaluating the likelihood of the same type of revolution happening here. There are so many analyses, in fact, that I won't bother you with another one. Personally, I think that there are few people in the world with enough information about China's overall political and social health to make either judgment.
I do think it's fair to say this: Egypt has become yet one more empirical example that progress, so-called, entails democratization. For a country and people that have become the most avid empiricists of all things “modern,” in that sense, Egypt is less an inspiration than a proof.  The progress of democracy in China in some ways depends on it remaining a matter of course, as fashionable as Coach bags and subways (every city in the US has a subway, right?), and as certain as gravity.
But this whole democracy-in-the-Middle-East thing has to work now, because, make no mistake about it, China will be watching.  Keep it up Egypt, we'll send you some of our presidential candidates if you'd like. Really.
Posted by Seth Gurgel at 9:16 AM