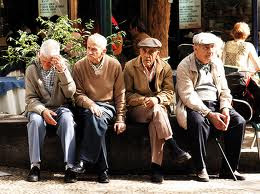 There's an old, apparantely mis-attributed, quote by Winston Churchill that reads, “Show me a young conservative and I'll show you someone with no heart. Show me an old liberal and I'll show you someone with no brains.”  Whoever said it, I'd like to suggest that this is a kind of Western common knowledge.  We expect our children to feel, question, and explore – to make something new.  We expect that, through the process of maturation, accumulation, and procreation, those older than us will naturally become more conservative, as they have very important things – their children, choices, and dignity, among others – to protect.
Of course there are myriad exceptions to this rule, but I'd like to argue that this “common knowledge” is what makes dramatic actions, admissions, and changes of course by our elders so moving, and so persuasive.   Our fathers say things like this.  After twenty years of fly fishing with me and my two brothers, and after we'd just finished yet another day of scaring trout upstream with nothing to show for it, none of us expected my dad to sit down, sigh, and then laugh hysterically, saying, “We really don't know what we're doing, do we?”  We didn't, but never thought that he'd say that.  When the formally pro-death penalty Supreme Court Justice Blackmun stated, after twenty years of trying to formulate a just death penalty process, “I will no longer tinker with the machinery of death,” it caused even the most pro-death penalty law students to pause, and even the least wonder-prone to wonder.
I believe that in China, this “common knowledge” is exactly the opposite.  Tradition, pragmatism, and political necessity require that the young use their brains conservatively, nodding their way up professional and social ladders that don't want their opinions but only their obedience.  Only once one is at the top of the ladder can one be explicit about what her heart is telling her.   This, in some ways, is the essence of a Confucian, conservative society: learn everything that's been learned, experience everything that can be experienced, have children, wallow in life's complexity and contradictions, learn about hypocrisy, submit your will to the mass of greatness that has come before you, and if you still have something to say at 70, maybe we'll listen to you.
So while the common knowledge may be different here in the Middle Kingdom, the power of such admissions of elders may be even greater because their audience is better prepared to accept them (or, at least, less prepared to disagree).  Our elders here have said quite a lot of late.