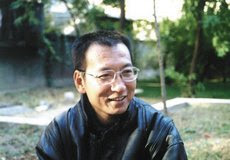 The man in the above quote, Liu, is of course, Liu Xiaobo, who was just announced to be this year's recipient of the Nobel Peace Prize.  He is most likely not aware of this fact, however, as he has taken up an eleven-year residency in a Liaoning prison, sent there for subversive activities.
This is the fourth time he's been incarcerated, almost always for his involvement in the writing and publication of works that contained unflattering analysis of the causes of China's social problems, and also outlined solutions to those problems that were absent the requisite amount of “Chinese characteristics.”  In other words, he has appealed unendingly for regime and structural change, and a full slate of the finest human rights mechanisms the world has to offer, imperfect as they may be.  This latest eleven-year sentence, given in the wake of Charter 08, a national petition calling for comprehensive political change, was one of the longest sentences given for political subversion since China shook off the detritus of the Cultural Revolution, which leads me to believe that “they doth arrest too much,” proving, perhaps, by the excessive tightening of their grip, that the groundswell for reform is higher than it has been in quite some time.

Liu Xiaobo has spent the last thirty years writing and talking about the unfulfilled promises of the Chinese republic.  The fact that he is gaining international support and represents a growing cadre of like-minded Chinese is certainly a cause for Lust.  The fact that Norway withstood heavy Chinese pressure and awarded him the Nobel Prize anyway elevated that Lust to viel Lust.

It just so happens that another poster on Weibo, who let fly a slew of posts after the Nobel Prize announcement, had one post that said just that: kaixin (happiness). One word and nothing more. We all knew what he meant.  Just kaixin, happiness, Lust. The next post was an open invitation to anyone online who wanted to head downtown to eat and drink with him. It made me think of the story of the Prodigal Son. Our first reaction was joy. Joy's natural reaction is to want to share itself with others. So Beijing students lit fireworks, and in Shanghai they went downtown to eat and drink, more or less mindful of the fact that virtually no one who saw them celebrating would have any idea why they were so happy.

But there's something else in that first post that deflates. A countertheme.

“There's a Chinese man named Liu, who has for a long time devoted himself to the non-violent human rights movement. Today he received an award.”

The first time I read it, it read with a beauty not unlike that of Chinese landscape paintings.  Simple, minimalist, and wistful: the understatement actually elevates the meaning, and allows your emotions to rush in around the bare bones of the text.  But this poster wasn't trying to be Hemingway for stylistic reasons.  No, we all knew that he had posted in this way to avoid being censored.  No “Xiao Bo,” no “Nobel,” no additional details that might pop up in a Google search.  Posting on Weibo is like a real-life game of Taboo, with posters trying to get their idea across without saying anything that might tip off censors.

At first avoiding the censors was simply funny.  People wrote their posts entirely backwards, or in Shanghainese.  People wrote detailed announcements of what the six o'clock news was broadcasting, which of course, was everything but Liu Xiaobo, whose name did not and does not appear on any media website and was not mentioned in the news.  But as time went by, things got serious.  More and more posts were deleted.  You couldn't text Liu's name via cell phone.  Liu's wife's house was apparently surrounded by police, who wouldn't let people in to talk to her, and she's now rumored to have been “encouraged” to leave the city to avoid media hounding.  Pretty soon, Weibo, the lifeline of liberal Chinese across the country, was a wasteland, on virtual lock-down.  And the first doubts crept into your head.  You started to think, “They very well might keep 99% of Chinese in the dark about this.”

Then you heard that the guy who'd invited everyone to dinner in People's Square might have invited one too many people.  People were worried he'd been arrested. You went back to his Weibo page and found that every one of his posts had been erased, or “harmonized,” as the ironic are want to say. That is, every post was deleted except one. His "kaixin" remained.  Lonely and horrifying.

It was horrifying, because at that moment you were anything but kaixin. Whether intentionally ironic or not, that lone “happy” on that vast censored plain hurt more than anything I've felt in a while.

It was then that I thought of Beethoven, and of Lustig, Traurig. This was a great day, but it may portend many far worse, both for Liu Xiao Bo and all of his ilk. I pray it does not for my kaixin friend. But the song doesn't stop, and doesn't have to stop. We can control the amount of irony we perceive behind that single kaixin. At least, I hope we can. And I hope Beethoven's right, that the song always reaches its end at Lustig, not Traurig. I think that's why Xiaobo hasn't changed his theme, no matter how many times he's been arrested. His happiness stems from something that can't be touched.

Congratulations Liu Xiaobo, may we not forget you, at least not until everyone's heard of you once.
Posted by Seth Gurgel at 2:13 AM