Something Forgotten in the State of Denmark? Crowding out the Mermaid at the Shanghai Expo 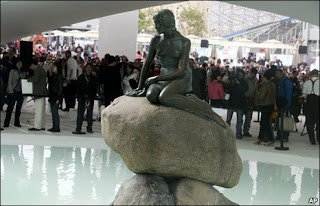 I went to the World Expo yesterday, to add my scalp to that of the 70-odd million others Shanghai plans to have notched to its belt when this whole thing is over.  Despite the fact that I have had many opportunities to go in the past and that I only live ten miles away, this was my first visit.   It had taken all of five months for me to overcome my cynicism; my childish urge to dislike anything too many other people like; and my fear of four, five, and even eight-hour waits to see single exhibits.  But China doesn't need you to approve or disapprove of anything it does, and it is this Taoist (?) desirelessness that assures that it wins most battles of wills.
So I went, holding firm to my mantra that it's better to have had mixed emotions and lost than to have never had your emotions mixed at all.
And mixed they were.  There's plenty of great things to see, and eat.  It was a lot of fun introducing the Chinese I was with to authentic Belgian fries, Thai food, and Turkish ice cream.  The architecture of many of the exhibits is really outstanding, breathtaking even.  However, the insides were often a different story. Or, rather, many different stories.

Some felt like you were reading the back of a label on very large tube of toothpaste.  Others felt like you'd been airlifted into a rubber products and ball bearings trade show.  The rich European nations fell over themselves to bring whatever national treasures they could part with. (France brought seven works of art that had never left the country before, each on its own separate plane.)  And montages!  Montages everywhere! 180 degree screens!  360 degree screens!  3-D!  4-D!  (I still haven't figured out which one -- time or space -- they managed to include.)  Each montage had the requisite amount of flair, soundtrack, and heart-rending/pulse-pounding/eye-misting/soul-transmigrating images to create impressions that stayed with you even though you left the building remembering nothing.   All sorts of things, wondrous things, mundane things. You went from something like the Met to a Swedish kitchen with a slide for an exit, from a trade show to a room simply filled with swings.  What was funny, is that if it weren't so obvious that countries had spent as much time and money organizing these exhibitions as they had, you could be excused for thinking that you were just sort of rummaging through their collective basements.
I have an idea why.

In 1792, the British sent the Macartney mission to China to engage the Qing emperor Qianlong.  Macartney refused to kowtow to the Emperor, creating a stir and much cognitive and Confucian dissonance throughout China.  While the kowtow never came for the emperor, this year's Expo shows many countries bending over backwards in varying degrees of discomfiture to an even higher power: the Chinese consumer.  It's no secret that the China has been able to pull the Expo out from its thirty-year swan song because we (non-Chinese) want Chinese to buy our stuff.   But there's a problem, no one really knows what the Chinese consumer wants or even who she is.
The feeling was mutual, though.  Chinese consumers don't necessarily know anything more about us.   Hence the Expo and its hullabaloo.   Countries gave us their attics, and their basements, and we rummaged like few have rummaged before.  If they didn't know what we wanted, we didn't know either.

It's hard to describe the feeling of twelve straight hours at the Expo.   Perhaps it's best thought of as a Serengeti wildebeest migration forced into a maze.  You rarely go a few seconds without contact from the back or front.  Un-group-like behavior results in collisions.  Stopping in this flow to read a caption or the fine print about Indonesian batik or Bosnian Nobel Prize winners is ill-advised, trying to head back the way you came, suicide.  This fact evens out the national treasures and the trade shows.  In this world, a Van Gogh is given about the same amount of time as a Malaysian Palm Oil prospectus.
But then, Denmark. An oasis from all of this. A beautiful and conscientiously designed pavilion, specifically designed to obliterate everything I just described above, 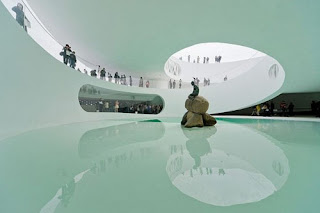 “When we visited the World Expo in Zaragoza [Spain], we were stunned by the artificial content. State propaganda in papier mâché,” Ingels said in a statement. “The Danish Expo pavilion 2010 is the real deal, and not just endless talking.”
As you can see, it's a gorgeous, simple, modern building.  There is one centerpiece, something worthy of being in the center, The Little Mermaid Statute, airlifted out of Copenhagen for the first time ever (not without controversy, mind you).  The building swirls its way up and around her, allowing you to stare back at her again and again.   It gave you time to think, to breathe, to remember the story, but not just that, to feel the story and the magnitude of the gift Denmark had given China.  After all, for once, there was nothing to do but look at her and think.  And she was real.  I didn't know the above quote existed and I said the exact thing to my girlfriend, “This is the one real thing we've seen all day.”
And it made me sad.  Which is probably ok.  I don't think you're supposed to look at her loneliness and be happy.  At that point, I welcomed any sustained emotion, even a non-Expo-like melancholy.  It was dusk, and the light around The Little Mermaid drew my attention down to her, two stories below in a pool of clean water (also brought from Denmark).  Two stories up, I planted my feet, hugged the wall, and prepared to defend my territory from the coming onslaught.  I didn't have to, though, because the onslaught went on behind me.
Every pavilion has a “customs booth,” a place where kids can get their Expo passports stamped with the stamp of the country they've visited.  It's a great idea, except for the fact that this adds to the earnestness and single-mindedness of the herd: Wait in line, get passport stamped, go find another line.  The customs line behind me had digressed into a medium-sized mob, which led to arguing and pushing and passbooks flailing in the air, so that it soon resembled a run on a small bank, with one, slight, dutiful Chinese passport stamper to handle it, doing his best for Denmark.  I turned around only once.  But I wasn't going to let it bother me.  I'm pretty much immune to small bits of public chaos now.
A large Danish man stalked up to the booth, Viking-like in both actual and relative terms, he bellowed at the crowd in a halting, Nordic Chinese, “Please line up in a civilized manner.” The word civilized in Chinese, is a word that I've only heard foreigners use with irony.   It's plastered everywhere, part of the nationwide effort to get people to speak, act, and think in a civilized way.  He was not being ironic.  And he repeated it over and over again.  He was visibly angry (my guess is that this was a regular occurrence), and was trying to use civilized to guilt them into lining up.  It worked on the Chinese passport book stamper, who muttered “Come on guys, this is really embarrassing, a foreigner is calling you out,” but the rest of the line seemed unphased.
People didn't quite know what to do, and sort stayed put: a passive, confused resistance.  The Dane then decided to up the rhetoric. He walked directly up to a heavy-set Chinese man, and yelled directly in his face, “You acting that way is of no quality.” Snap.


This made me turn around.  I'd rarely heard someone called out like that in public, and never by a foreigner. While saying someone “has no quality” sounds rather mild, I'd direct the non-feint of heart to this chat room, where some Chinese try to decide how to translate “you have no quality” into English. Be forewarned, it's pretty crass. One commenter on the bottom of the page probably summed it up best when s/he wrote, whatever the best English translation, “It's a lot, a lot of asterisks.”  This kind of public criticism can lead to a serious altercation in any country, and China is no different.  Whatever it was -- the Dane's size, his persistence, his foreignness, his disrespect, (his rectitude?) -- his Chinese rival coolly moved to the back of the crowd and formed a line. Others followed. Quietly.
At that point, already feeling sad, I looked at “the only real thing at the Expo” and felt even more so.  She seemed farther away from me, but then again, perhaps more real.  She and I were now facing the same dilemma.   No longer was it her thinking “Do I want to be a human or a mermaid?” [Or, for those who like the real story, “Do I kill my love or kill myself?”] and me sympathizing with that choice and what that means for all of us.  Now it was “Do we really want to be here or just back home, to the West?” Or maybe, “Why did we come here, didn't we know that it was just going to end this way?” Or maybe, “What is it going to take for East and West to really understand each other?”
More than an Expo for sure, but definitely not less than one.  More realness, definitely not less.
Posted by Seth Gurgel at 12:26 AM