China vs. Japan, Out of the Mouths of Babes 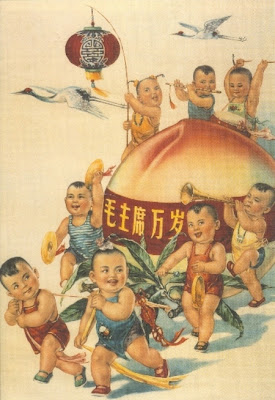 A few days ago I was walking along the road, weaving in and out of what must have been a kindergarten class coming back from a field trip. Chinese kids are cute. Not just in the way that all little versions of people-not-your-own are cute, but they've also got another quality that makes them even more endearing: Unlike children in (most parts of) the world, Chinese go to school to learn not just how to read and write but also how to speak.
Mandarin, while it's spoken by an increasing number of Chinese, is often not the language spoken in the home—especially here in Shanghai. This means that elementary school language classes are packed with pronunciation and oral Chinese classes. You even have to pass pronunciation tests to graduate from high school and college, which is why foreign teachers here are constantly asked if their English pronunciation is the “standard” pronunciation (and obviously, unless you're from Wisconsin, it's not). So, if you listen carefully to a young Chinese speaking Mandarin, they speak with a broken, self-consciously exaggerated enunciation, as if whatever they were saying was still part of the rote exercises they did in class, and also as if they're taking the first greedy bite of a candied apple. It's cute, trust me.
On the day in question, I happened to be eavesdropping on this phalanx of hyper-enunciators. From behind me I heard, “If I were a Chinese official...” followed by a dramatic pause. I knew this pause. This was a kid who wasn't talking to anyone, but rather, to some imaginary everyone. He was a transcendentalist, who had made up his mind about something and was going to proclaim it to the world, regardless of who was listening or how out of context it was.

“If I were a Chinese official...” What? No one would go hungry? No more earthquakes? There wouldn't be any homework? You'd make it illegal for grandmothers to force their grandchildren to wear three layers of clothing even in September? Speak, young one.
“If I were a Chinese official, I'd send a million soldiers into Japan and destroy them.”
However transcendentalist, this kid was not Thoreau.
For those of you who've been watching the recent international staring contest between China and Japan (note, Japan blinked), the fact that a child in one of those two countries might spout this kind of language might not be all that shocking. In fact, for those of you who haven't forgotten childhood, this statement is also not that shocking (I probably said something of similar ilk after watching Rocky IV). What worries me most is the thought that  China's officials were stuck, trapped in a position where a large portion of their constituency could not have transcended the belligerent idea of my little transcendentalist friend.
Even after China most certainly “won” the diplomatic dispute, Chinese chat rooms were filled with a bizarre griping that China had proven itself still “too weak” in the international context. Good Chinese friends of mine echoed the same sentiment.
Too weak?
Not once did China ever publicly change its line, not once did it ever compromise or ever try to recognize that there was any complexity to this dispute, that there was any possible legitimate disagreement. But, to be honest, I don't mind that so much; there's actually a pretty good international legal reason for doing so: neither side wants to show that it doubts for a second that the other has some kind of claim to the islands at the heart of this dispute. What was very troublesome (rather than just un-gentlemanly), however, was the way China had to keep pummelling Japan: calling off all mid and high-level talks, embarrassing the Japanese ambassador to China, the threatening of the Japanese tourism industry, and finally, the targeting of Japan's (and the world's) technology industry by the purported refusal to allow exports of rare minerals to Japan. From almost any point of view, China was anything but weak.
But from at least two points of view, they most certainly were.
The first is weak governing structures.  We normally think of Constitutions as protecting rights, but they also outline divisions of power in governments, proactively preventing disorder and opportunities for abuse of power.  This dispute showed a China rife with special interests, both inside and outside the government, who were abusing whatever division of power existed (outlined in fascinating detail here and here).  Special interests at home are resulting in China's failure to speak with a unified voice abroad.  This does not bode well for anyone, although perhaps it does portend a more indirect way to encourage Chinese constitutional reform.
The second weakness is how the government is beholden to its hawkish kids. I should start by saying that very few of us, myself included, know enough about the horror of what happened in China during the War Against Japanese Aggression, better known in the US as what are you talking about?  Anytime between 10-20 million of your people (mostly civilians) were killed in the recent past, there's going to be some animosity between yourself and the perpetrator, especially if that perpetrator used some of the most vile means imaginable to do so.  It's even more real here in the Yangtze Delta region, as every few months or so my girlfriend's mother will talk about visiting the ashes of villages near her home that were completed sacked, looted, terrorized and then burned to the ground.  She's talked about those more of late.
But even though that's lamentably the case, the Chinese leadership hasn't helped itself in two other important respects vis a vis its children.  First, it has made the doctrine of not ceding one inch of its disputed territories part of the hallmark of its legitimacy, and bulwarked that with a singular historical narrative that emphasizes China's two-hundred year-long humiliation at the hands of Western powers.  China's recent rise out of that humiliation is an anti-thesis to that narrative, and is spoken of in determined, Hegelian-Marxist terms.  In other words, it's an unchallenged version of history that is announced with a singularity we normally only see in religious faiths in the West.  I'm going to call this Weakness 2a.

Last night at dinner, my girlfriend said to me, "You don't understand, the one thing that Chinese leaders absolutely will never do is compromise on territory they believe to be their own."  I said that I did understand, and it was very unfortunate, because there's a lot of territory Chinese considers its own that many other countries feel to be their own as well, even if it is mostly uninhabitable ocean and really high mountains (...with oil under them). When I heard my little friend detail his plans for Japan's demise, I couldn't help but imagine myself as his teacher. What would I have said to him had I heard him say that?  Probably some happy jingle about non-violence, love, tolerance, or forgiveness -- but hopefully the truism would have some impact.  I worry that Weakness 2a would compromise the answer even a well-meaning Chinese teacher could give our bellicose transcendentalist.

Adding to the weakness of a singular historical narrative is Weakness 2b:  the vigorous protection of that narrative from competing ideology and sophisticated reasoning.  What this means is that even if there are teachers who wish to teach a more complex story, rules of the written and unwritten variety stand in their way, such as this dictate on "Professional Teaching Ethics" issued this past spring in Fujian Province, which forbade teachers from "the dissemination of misguided or erroneous speech against the general and specific policies of the Party, the basic theory of the Party, the law and the constitution of the country during the course of teaching, which leads to a harmful effect on conveying correct ideas and political ideals to the students.”  This creates a moral (and professional) dilemma for even the most enlightened teachers.  Do your job and lose your job, don't do it and keep it. But most teachers don't need a rule to tell them this, it's pretty much a consciousness you are born with here, or one you take up once you go through customs.

The sad result of this is that few Chinese students are taught to read and filter competing renditions of the same event, which, in this author's opinion, has played no small part in the recent explosive, nationalist anger evidenced by some of China's most educated students at what they deem to be Western media bias in its coverage of China.  It's not that the bias isn't there (although most of the time it's simply lack of information or understanding), but that many Chinese aren't used to dealing with competing normative claims regarding the same event.  Of course, few of us are either, really.  How many of us bookmark both the New York Times and Fox News, etc.? I don't.  (Although I've tried to squeeze as much mileage out of my Republican upbringing and environs as possible).

I think that most of us probably look at Weaknesses 2a and 2b as shortcomings, but not as weaknesses.  In fact, it's more common for us to see them as threats or opportunities.  Threats because democracies tend to get uncomfortable dealing with non-democracies.  Opportunities because most Western capitalists have loved doing business here -- no messy competing interests or democratic processes to deal with: it fuels their inner autocrat.  But could I paraphrase Mick Jagger for a second and ask for some "Sympathy for the Politbureau?"  Weakness 2a and 2b threaten to hoist them on their own petard.

An example.  These past two weeks, there have been many well-documented, virulent anti-Japanese protests across China.  At first glance, one is tempted to assume this is all positive for the Chinese leadership -- create a common external enemy, fan the flames of nationalism, and make people forget about their domestic problems, it's win-win.  But governments have been shutting down these protests.  Most likely not out of some enlightened understanding of the nuances of international politics (Weakness 2a won't allow that kind of talk), but because they're afraid that the un-huddled masses may all of a sudden start airing their many domestic grievances at the same time.  This happened before, with horrifying result, a few years after the release of Rocky IV.


So while I, too, like many, was frustrated by the heavy-handed, unsophisticated way in which China bullied its way through this recent dispute (and the way it's still bullying), I've begun to feel increasing sympathy for the Chinese leadership, sometimes even more than I feel for the little warring Emerson I met on the street or his teachers. Even if they had wanted to handle this situation differently, could they have?  I'm beginning to think not: they're all handcuffed by a petarded education system.
Posted by Seth Gurgel at 11:09 AM