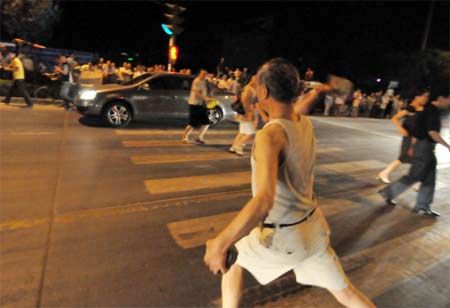 If it were possible to summarize my overarching purpose in coming to China, I suppose it might be this: to understand the Chinese sense of justice.  This of course, is impossible, and one of those silly pursuits I should have abandoned in my youth.  But like McDonald's double cheeseburgers, bad television, and trying to make people like you, there are just some silly pursuits that never leave you; nor, perhaps, on second thought, should they.

Since I have yet to figure out what Chinese justice is, any time I try to explain it to someone else, I just end up telling stories.  Until I read the article on "human flesh searches" linked below, "justice" boiled down to two recent news stories -- one that made you laugh, and one that terrified.


The first was that of the Lanzhou Brick-thrower.  A 74-year-old teacher who'd had enough of cars running red lights decided to take a wheel-barrow-full of bricks down to the intersection and pelt any car running a red light with a brick.  The best part of the story was the public response: a crowd gathered, a couple other old men started lobbing bricks along with him, others ran and brought them water and more ammunition. Once the story broke, he became a hero of sorts.  If you read my recent post on red right turns, you can probably guess that he's my hero as well.  As the linked article relates, his vigilantism received near universal acclaim, in the media and over the internet.  Which meant that he was never punished for the damage he caused, but also meant that he, very soon, became a reformed, model traffic monitor, who dutifully traded in his "justice bricks" for more a civilized (and no doubt, ineffective) means of traffic enforcement.  Strangely enough, while traffic problems exist everywhere, he decided to monitor traffic in a city two thousand miles away from the scene of his former public demonstration.

The second story didn't begin or end as well.  Last year, Nicholas Kristof posted about the story of Grace Wang,


"...a Chinese student at Duke University who tried to encourage dialogue between pro-Tibet protesters and pro-China protesters. Grace is from China, and bloggers there perceived her as betraying her country and siding with Tibetan independence. The result was a nationalist explosion on the Chinese web, with people posting her parents’ home address [and more] and comments that came across as threatening. Her parents abandoned their home for reasons of safety."

What I always found terrifying, and fascinating, about this story was that what censored Grace wasn't a government or a firewall, but the nationalist, ethical norms of certain wired members of her culture. These online masses enforced a version of vigilante justice, just as our kindly brick-thrower had, only theirs transcended borders and rendered any US Constitutional rights Grace enjoyed ineffectual to the extent that she wanted to remain a part of the Chinese community (she hasn't returned to China) or loved ones of hers did (her parents' house was ransacked). However far their actions are from what you might call "justice," those Chinese netizens could demand that Grace yield to their morality -- to the unwieldy, anonymous, and volitile force that has been unfortunately (and perhaps aptly) named, the "human flesh search engine," in a recent New York Times article. An article that confirms that Grace's story was not an isolated incident.

There's quite a lot of excellent (not just excellent, but gripping) reading linked above, so I'll keep my own comments short: I'm overwhelmed.

One thing that's always amazed me in my study here is how, on one hand, there is no lack of awareness of government shortcomings (indeed, the national media is quite open and honest about the need to purge corruption; the Chinese internet world can be even more unforgiving) and yet, there is also the concomitant mass tendency to assume the guilt of the accused simply upon the announcement of the charges, as if the existence of the first condition bears no relevance on the validity of the second. This might be unfair of me, for, as an American (lawyer no less), I'm perhaps oversold on the truism that one is guilty until proven innocent, which is in many cases neither theoretically or practically true.

And yet, if you have time and energy to read the above articles in their entirety, I think there is something more to the explanation of what's happening here than just a universal, cross-cultural danger of internet dehumanization, or the vigilantism that can occur when one feels unprotected by the state, or the problem of a collective culture that can occasionally proclaim an individual guilty for even allowing the intimation that s/he has done something wrong. I think there's something else particular to modern Chinese culture implicit in both the harum tales of individuals standing up for what's right and also in the scarum tales of masses of netizens doing what's wrong.

I believe, first, that it's a problem of trust. A profound lack of public trust exists in China, between individuals and the state and between individuals themselves. Hence, no matter who's accused, whether a government official or a private citizen, each is quite unlikely to gain the benefit of the doubt. But going one step further, this lack of trust can then be either the cause or the effect of another, devastating belief: the belief in the omnipresence of societal badness, and of the need to purge this badness. It's as if everyone maintains the belief that every other stranger is Lady Macbeth. And in this Oriental Scotland, the willingness to instantly villainize whoever's been accused becomes the collective outing of the spot.
Posted by Seth Gurgel at 10:27 PM