Moral Dilemmas Solved While You Wait, Subway Art in Shanghai 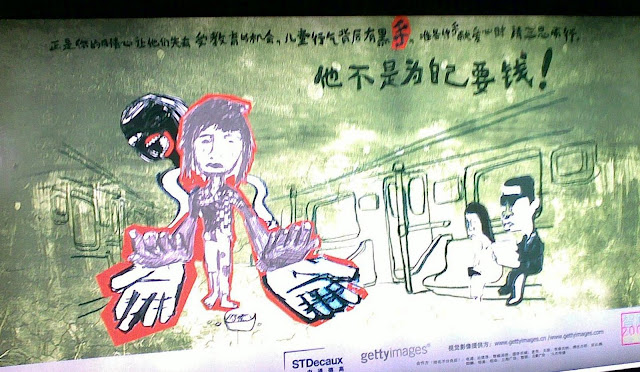 A few weeks ago I was waiting for my subway transfer and was struck by the art that lay across the tracks. Subway ads are normally filled with carefully manicured models or slick public service messages about forming lines, being polite to others, and other "civilizing" behavior.  You can imagine my surprise then, when I saw the two pictures posted here staring me in the face.  They're abrasive, messy, and dark, with cryptic messages to match their aesthetic: impassioned admonitions to avoid giving money to child beggars, an alarming and increasing phenomenon on the Shanghai subways.  I'll do my best to translate this Guggenheimaganda.


The picture above, with the specter rising out from behind the child says, "She doesn't want the money for herself."  True enough.  This is a message already on most people's lips here, that children are part of begging rings, raising money for cruel and abusive adults -- made popular (or at least confirmed) in equally horrifying fashion in Slumdog Millionaire.  The "fine print" then supplements the argument, though some might question its logic: "It's exactly your sympathetic heart that's making her miss out on receiving an education. There's a black hand [written in red] behind the circulation of begging children.  Think thrice before stretching out a compassionate hand to help, and then don't." 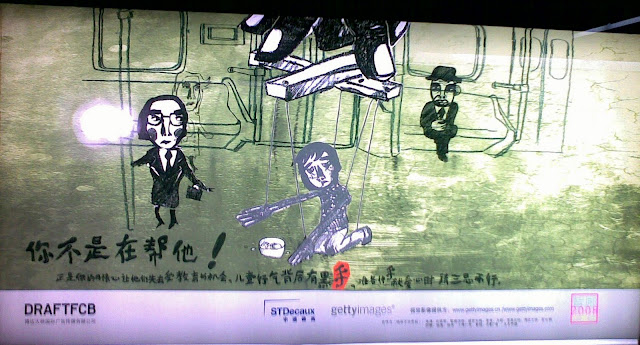 The second picture cautions, "You're not helping her!"  and then continues with the same fine print.  Equal emphasis on the black hand.  I'll only note that this picture is unfortunately very true to form.  The children who come through the subway, no doubt numb from kowtowing and grabbing the feet of thousands of patrons a day, are stumbling about in a ghostly marianette dance.  In other words, this picture completely fits the way the world feels when one of these children is at your feet.  In fact, that's my problem with both of these paintings, they're too convincing.

I get chills every time I transfer at this station, but recently I've been getting angry.  It's not that they don't portray a legitimate view of reality and of the possible non-salutary macro-effect your charity might have, but that they make not giving money to one of these children the equivalent of forming a line or waiting for people to exit the subway before entering -- a matter of course, the only right answer.  I think that the moral dilemma here should remain a dilemma.

After struggling with the problem of the child in front of me and the evil (that might be) behind her, the problems of creating a market for villains but also those of creating a dearth of societal compassion, stuck between my fear of being swindled and my duty to respect each human life that passes before me, only then should I make my decision, in pain, sadness and perhaps righteous anger. It's probably going to be different each time.

It's not the pictures or their message, but their certainty that frustrates me.  After all, perhaps the only thing I really owe that child is to think about her as a person.  To look her in the eye, and say, "I can't give you money, but it's not because I don't love you."  I just worry that looking at these pictures is going to keep us from looking at the children.
Posted by Seth Gurgel at 6:51 PM