Building Up and Tearing Down? Educating Workers on the Labor Law 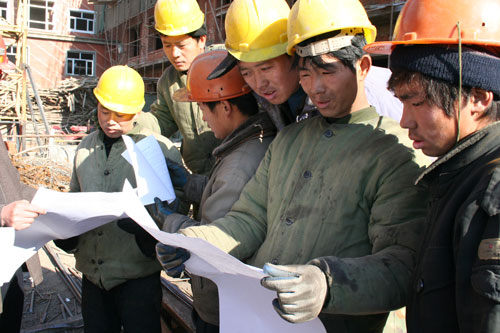 Just today, I got my hands on a workers' pocket guide to the Labor Contract Law, China's new labor law that's been hailed as (or hoped to be) a panacea for many of China's labor problems, as well as for the recent, worrisome, social unrest and growing economic inequality. I had lots of other materials to choose from, some far more erudite and enlightening no doubt, but this one had diagrams, cartoons, and middle-school-level Chinese, so naturally I started with it.

It's a small, passport-sized book, limited to a few dozen pages, but it does an excellent job of introducing the law to any worker who's lucky enough to receive a copy. The law's taught in a Q & A format, with the questions pertaining to real-life problems at the beginning of each chapter: “Little Ming's factory didn't have money to pay her this month, so they gave her a box of pants off the assembly line and told her to go sell them on the street in order to get her monthly wage.  Is this legal or not?  Answer: No. It is not.”
I learned quite a bit, but wouldn't have thought it worth mentioning here until I got to the last chapter, which has the laconic title, “Life.” There's no labor law talk here, but simply a chapter that seeks to help the readers –most likely “peasant” migrant workers―to adjust to life in China's cities. “Life” is kind of a cross between the State Department Travel Warnings and Miss Manners, and it had me laughing on the subway (something it strictly forbids).

You should do your best to develop good life habits, the most important [emphasis added] of these behavioral norms and habits are the following:

1) Line up for public transportation and in supermarkets, don't cut in line.
2) Don't make loud noise or roughhouse in public places.
3) Don't spit or throw garbage on the ground randomly – work to keep the environment clean.
4) Be conscious to care for public facilities: public and private property, trees, plants and flowers, public phone booths, underpasses, garbage cans, etc.
5) Pay attention to living in a polite and civilized way, wear proper clothing and accessories [this could also be translated “befitting your position”], behave in an appropriate manner, try to avoid vulgar behavior.
6) Pay close attention to personal hygiene, wash your hands before and after meals, avoid strenuous work after meals.
7) Reasonably plan out your food and beverage consumption, avoid overeating and drinking too much, too fast, don't drink alcohol to excess.
8) Be careful to use civilized language, such as “Hello,” “Thank you,” “I'm sorry,” etc.
-------------------------------

Why is this noteworthy? I think its noteworthiness lies in the fact that the Chinese friends with whom I discussed this passage and others felt it lacked note-worth.
On one hand, these very reasonable suggestions make complete sense. In China, the move from the countryside to the city is roughly the equivalent of going to another country (especially if that city's Hong Kong), and there is quite a bit of a cultural clash between the two groups.  Moreover, I'd be a hypocrite to deny that I haven't looked to the sky on occasion and prayed that certain people next to me (on the bus, in a restaurant, in the park) who were breaking one (or all) of these “behavioral norms” would cease and desist.  The book's life lessons seem even more reasonable when one considers that little communication occurs between migrant workers and their "more sophisticated" urban comrades – even if someone were to live in Shanghai for ten years, the amount of real, sustained conversation that occurs between those with Shanghai hukous (residence permits) and those without is about the equivalent of what goes on between Americans and their friendly neighborhood undocumented aliens.


The organization that published this handbook works closely with workers, respects them, and is simply trying to make their lives in the city easier. After all, as each of my friends told me, “These people have not been educated...” and need it desperately. In many ways, these eight rules are  the nucleus of the modern Chinese elite's vision of polite public society: rules of etiquette mixed in with common sense maxims from the archetypal Chinese grandmother, rules about protecting the environment gel seamlessly with words from the wise involving various ways to avoid overtaxing your digestive system.  [For those of you who haven't lived here, disobeying China's many common sense rules can be as jarring to some Chinese as being impolite.  Failing to dress warmly enough isn't just a bad idea, it causes as much neural disturbance as a loud mobile phone talker on the subway.]

And yet...and yet, there's a stark contrast between educating someone as to her legal rights and then, in the same breath, telling her to avoid spitting in public and defacing public phone booths. I've wrestled with this all day, struggling with why I was struck by this intra-pamphlet shift while my Chinese friends were not. I suppose a lot of it comes down to differing conceptions of law.

The first nine-tenths of the handbook were an education, but they were an education about the legal rights of each Chinese person. These rules were meant to be, and are, a great equalizer in Chinese society. I've talked to many lawyers who feel that, if nothing else, the new labor law has ratcheted up the legal consciousness of the Chinese workers.  This is a huge step towards rule of law.  Others have mentioned that while the standard (often only) path to get justice in China was (is) to throw oneself at the mercy of a government official, the labor law has given workers a “more dignified” pathway. They don't have to rely on the mercy of an official; rather, they can assert a right. This is the appeal of rule of law, an appeal that is directly disproportionate to the number of officials one knows.

How different these first chapters are, then, from the last. The first are ennobling, liberating even, the last, well, remind them that they are from a dusty, dirty, different world and to that dust they shall return (unless they can manage to change their hukou).

But perhaps I'm wrong. Perhaps each chapter fits in comfortably under the heading of education: people need to learn about their rights just like they need to learn to act like proper Chinese rights-bearers.  After all, I'm still not sure which comes first, the fallacy that we're all equal before the law, or the one about being equal.


...but couldn't they just make separate handouts?
Posted by Seth Gurgel at 12:35 AM