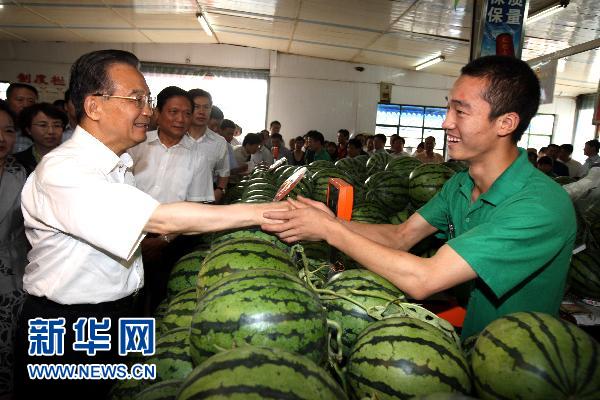 Here's the title of a recent article I saw on workercn.com, “We have to show care and concern for the new generation of peasant [migrant] workers just like we would for our own children.”
“On June 14th, on the approach of the Chinese people's joyful celebration of the Dragon Boat Festival [Duan Wu Jie], Premier Wen Jia Bao successively visited a number of child welfare institutions, the 'Modernize/Enrich One's Country' Community, and the construction site at the Line Six 'Peace' subway stop; [he went] to call on orphaned and disabled children and those receiving little social aid, to understand the current vegetable supply and price situations at the farmers' market, and to convene a 'new generation of migrant workers' symposium.”
I have great respect for Premier Wen Jia Bao (see my earlier posts on his “dignity” comments), and it was with equally great interest that I opened the link to this article about Wen's recent day with the people. As I've mentioned earlier, “Grandpa Wen” is the human side of the central government, a side that has been increasingly shown in the news media. Proving again that no one can compete with China in either photo op quality or quantity, Wen managed to visit poor and disabled children, poor pensioners, the poor pensioners' market, and the new generation of poor migrant workers all in one morning. (Showing care and concern for one dispossessed group is good. Showing care and concern for every dispossessed group is better.)

I think it's true that dignity has to be “won” in China (and elsewhere), but I don't want to say the rest of the above about Wen (which is why I haven't included the other four verses of my adapted Christmas carol). Considering what he has to fight against on a daily basis, and what he's been through, I doubt few could do a better job of expressing humanity to people who society sees, and who most likely see themselves, as far less dignified. If he is Wenceslas, or even part-Wenceslas,  he is only because his castle is far more prison than abode.