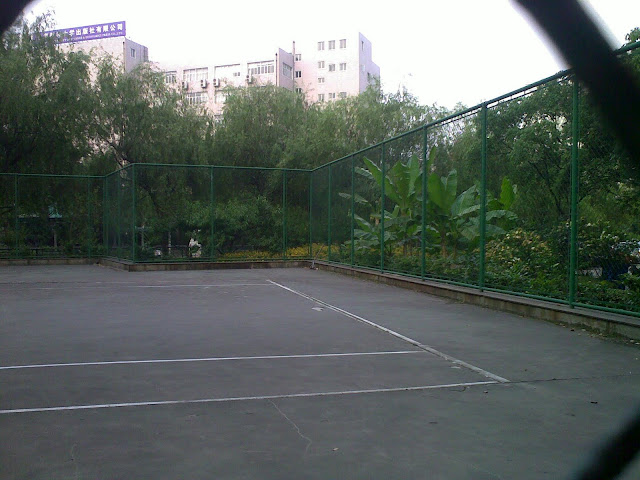 I'm no good at writing home about my day. Sometimes I'll write home – paragraphs, pages – and I'll still get this reply from my mom, “That's nice Seth, but what have you been doing?” So here goes. I'm going to try and stick to a narrative.
Yesterday my girlfriend and I went to play tennis. It's the first time she's ever played, which I felt gave me good odds. Thus far, we've only played sports that were geared to her strengths (coordination, focus, poise, general motor skills) and not to mine (the fact that I'm twice her size). Of the racquet/paddle sports, then, tennis was the natural choice, especially because she's had a plastic dry cleaning bag stuffed with over one hundred brand new tennis balls sitting on her balcony for over five years -- a present from a friend at an athletic club who never bothered to ask her if she owns a tennis racquet, plays tennis, or puts much stock into gift presentation.

There's a tennis court in her apartment complex, with a droopy, Savannah-type aesthetic, as if it's the tennis court next to the Garden of Good and Evil. It's a single court, enclosed with an hexagon-ish fence. There's more than enough paved area inside for two courts, but it's arranged in a way that only allows for one – with the same uncomfortable asymmetry of a baseball stadium that's been converted for a football game. For weeks I'd passed by, secretly plotting our tennis take-up.
The day arrived. We warmed up, and I could feel my 5th Grade Rock River Tennis Tourney prowess coming back to me. She seemed quite impressed. Relieved might be the better word, for as modern and “non-feudal” as she is, she still maintains a quite Confucian conception of the male-female sports hierarchy, and was getting tired of beating me in ping-pong, badminton, shuffleboard, and other sports that shall remain nameless.
Imagine my disappointment then, when, just as we started to really hit, I started edging back behind the baseline and realized that the fence was far too close to allow any real backline play. My racquet kept rattling off the chain-links behind me, and the ball kept on ending up in the net. My power game was effectively cowed, as was my ego. Of course, this being the first court Xuxu's ever played on, it wasn't the court, but I, who had the problem. Any excuse I made, sounded like, well, just that. I felt how the Russian hockey team must have felt when the Canadians made the Olympic ice smaller in order to limit their Slavic speed and agility. And, as is unfortunately the case for ex-pats here who unfortunately encounter an unfortunate coincidence, the thought crossed my mind that this was some type of Chinese conspiracy. They were badminton-ing tennis, no doubt as payback for our 100 years of semi-colonization.
Of course, this is ridiculous. There are no Chinese conspiracies as far as you or I know.
But what is interesting is the way this baseline-less tennis court mirrors quite a lot in modern China. Things here are built by people who've no interest or experience with what they're building. Homes and skyscrapers are built by people who wouldn't see the inside of modern highrises if they weren't building them. (Which is why the most beautiful apartments almost always seem to be missing something. Insignificant example: I've never lived in a Chinese apartment with a bathroom drain placed at the lowest point of the floor, which has meant that I've squeegeed the bathroom floor after nearly shower I've taken in my three-plus years here.) Tennis courts are constructed by people who have no reference point but badminton, which (unfortunately for me) requires very little baseline play. Legal systems are built by people who've never known the feeling of non-human checks on power.
The word for this in the business/manufacturing world, I've learned, is “implicit quality,” which, when you put “low” in front of it, sounds quite disparaging. Despite the fact that “low implicit quality” seems like quite a vicious personal attack, it's simply supposed to denote the ability of an assembly-line worker to view the product he's making with the same critical eye that a developed-world consumer would see it. I've been told that training a quality-control worker on a Nike shoe line to see a pair of running shoes with the “same eyes” as an American consumer takes nearly a year. Before that, they're quite unwilling to take a perfectly good pair of shoes and just throw them away. “Low implicit quality” is the benign answer to why we've now got lead in our toys, carcinogens in our drywall, and any manner of nasty stuff in our toothpaste. Or, in other words, “Congratulations, by virtue of the fact that you've grown up in one part of the world, you know what kind of stuff to throw away and what kind of stuff to use for six months and then throw away.”
But just like that tennis court's not going away anytime soon, neither are cheap unsafe goods and cheap unsafe toys. Not until the people who make the products are making them for themselves.
At the end of the day, there don't seem to be any shortcuts. You either do the work, pay a little more to raise everyone's “quality level,” do your best to ensure that the people making Nikes can buy them, or you just get used to killer consumer goods and tennis courts that are only good for badminton.
Posted by Seth Gurgel at 6:17 PM